It's easy to vote for Socialism. The impossible part is paying for it.

Comment by moonmac on "Is America Heading For A Systems Collapse?" By Victor Davis Hanson, ZeroHedge, 1/21/22.

Yowza! We got us some disinformation here!

I grow weary over reading about asinine -- but widespread -- claims that this or that is DISINFORMATION. The essence of the charge is that certain statements are

Yes, the earth will stall on its axis if such a powerful untruth is permitted to be promulgated. If an innocent, unsuspecting citizen has the slightest encounter with this truth the consequences are dire.

(From one of the great movies of all time, "Top Secret.")

Of course, all that is required is to level the charge of "disinformation." It is unnecessary to make any kind of a case for the falsity of the statement or to focus on any of the elements of fraud. It's wrong and that's all anyone needs to know and the infantile understanding of the citizenry is a given.

Well, what ARE the elements of fraud? In the common law the practice developed over the centuries to require fraud to be proved with particularity as, for one reason, it's a serious attack on another's reputation for good character to allege that he or she is a lying sack.

In 1996, the Montana Supreme Court laid out the elements of fraud in great detail.

Other courts say essentially the same thing but this is the most detailed list I've run across. I would add after (1) that the representation or statement must be of fact not opinion.

So you can see that making a fraud (or "disinformation") case stick requires more than proving that a false statement was made. If I'm buying a used car and the seller tells me that the suspension and engine are in top shape I can't claim I was defrauded if the front tires are obviously worn unevenly and the engine runs but with clouds of blue smoke coming out of the muffler.

But the "disinformation" maroons take it to another level by standing pat on a mere allegation that a certain statement was made. Ergo fraud. But we all know their angst is merely that they don't care for the statement because it is destructive of their agenda. If they have to break the unsuspecting speaker's neck in the process then, well, that's just what the bastard deserved.

This approach at best assumes that words, allegedly false, have merely to touch the ears of any citizen schlub and the damage is done like the bumper strike we saw above. Independent agency or responsibility of the hearer is blithely assumed away and he or she is implicitly treated as a gullible infant without critical skills of any kind.

Bear in mind too that this phenomenon has arisen in that very nation whose citizens devised or at least perfected the term "bullshit." Can we accept in the public sphere of this particular country the notion that citizens have no concept of that term or of their own responsibility to assess information from others with a critical eye? And what citizen doesn't every bleeping day exist in a blizzard of commercial hype? Do they just sit there like rubes and assume that their lives are incomplete if their family circle doesn't include at least three homosexuals, four black Harvard grads, and a Mexican feminist?

So, the next time you hear someone level the charge of "disinformation" ask yourself who it is in that case who is a lying, deceiving, vicious horse's ass?

Bold action is called for.

On Tuesday last week (4 January), the markets got spooked by the released minutes of a Federal Reserve Open Market Committee’s meeting held three weeks prior. What was the fuss all about? Well the minutes indicated that the Fed seems to be inclined to envision starting to prepare to begin planning to initiate raising interest rates sooner and more aggressively than previously thought and to “normalize” their balance sheet beginning already toward the end of this year.

The figure [150,000 female deaths from anorexia] has been quoted by everyone from Ann Landers to college textbooks, because as Carol Iannone remarks about the general atmosphere of women as victims, "It is almost as if feminism had finally discovered a problem that can unite all women across all barriers: the existence of men."

Living in the Matrix Times 100.

FURTHERMORE, we have also been living through the most massive, globally coordinated propaganda and censorship campaign in the history of the human race. All major mass media and the social media technology companies have coordinated to stifle and suppress any discussion of the risks of the genetic vaccines AND/OR alternative early treatments.

"What if the largest experiment on human beings in history is a failure? A report from an Indiana life insurance company raises serious concerns." By Robert W Malone MD, MS, Who Is Robert Malone?, 1/2/22.
Posted by Col. B. Bunny at 1/04/2022 No comments:

“Lots of messaging on the vaccine, but zero mentioning on treatment, none. And it’s been from the very beginning. There is a theme here, I hope everyone’s starting to get the theme. There is zero effort, interest, promotion, or care about early treatment, people who are sick with COVID-19,” said McCollough.

“But there is a complete and total focus on people who don’t have COVID-19 and giving them a vaccine.”[1]

What the swine want, they push relentlessly. Like closing the border. It won't happen because they want it open. If border jumpers voted Republican, the border would be hermetically sealed by midnight tonight.

From one of the best articles you will read about the Covid-19 hysteria and the real agenda of those creating it:

In the [unreal] Metaverse, a public health crisis caused by a virus has zero medical advice given out to people, but just a relentless barrage of talk about cases, hospitalisations and deaths, with all knowledge of effective early treatments ruthlessly suppressed.

In the Metaverse, the injection of billions of lipid nanoparticles containing mRNA, which has never been injected into people before, which tricks the cells into allowing it to enter, which then causes billions of cytotoxins to be produced in cells throughout every organ, and which the manufacturers have indemnity but no proper safety data for, is hailed as a saviour. In the real world, this is the most dangerous, reckless medical experiment ever performed on masses of people without their knowledge of what they are being given, and the long-term consequences could be unimaginably disastrous, as Professor Sucharit Bhakdi explains in this horrifying warning.

"Reflections On Another Year Of Covidian Lies & How The Truth Will Ultimately Prevail." By Rob Slane, ZeroHedge, 1/2/22.

There. I uttered the phrase. Blacks can with loot, burn, transform cities into crime-ridden slums, fail dismally in school, create a scourge of single-parent families, suck up welfare, game the system, wear pants down around their knees, and treat fellow blacks like ducks in a shooting gallery. With complete impunity and to Democrat accolades of "poor babies!" Whites, however, cannot remark on these matters except to do the sackcloth and ashes number in the process, and woe to he who is given to noticing that the so-called civil rights revolution was a futile enterprise: 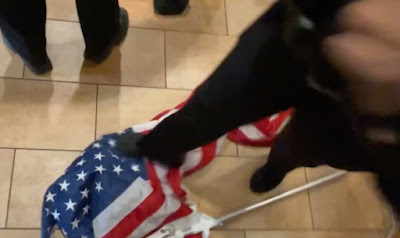 That being a picture of a POS POC NYPD female officer stepping on the flag of our country. It sure as hell isn't her country. Any damn fool can see it was deliberate and if a statue of Robert E. Lee is "emblematic" of something then this damn well is too.

The best Derbyshire quote of 2222:

Race differences in social outcomes are plain to the naked eye. Your local college Computer Science department is full of "East Asians; your local jail is full of blacks, and so on. What explains this?

It's remarkable the progression from slavery to "Jim Crow" to "underprivileged" to "underserved" to "disadvantaged" to "marginalized" to "legacy of slavery" to "culture" to a Marx-fueled screech of Black Lives Matter (just blacks) about the devil white man, structural racism, and white privilege. The most credentialed black academics fall over themselves to embrace the most lunatic ahistorical nonsense. We wuz kaingz 'n shee'.

Derbyshire has his own similar take on this. It's better actually so RTWT. It's a short segment in a longer article. Also worth reading, of course.

Suffice it to say, a decent and massive attempt to give blacks a shot at equality and full citizenship has been spat upon by blacks and the political leaders they elect again and again. Yes, there are the Sidney Poitiers and many sensible, patriotic blacks but there are also a host of blacks in public life who live to tear dear down traditional white America and a host who are not in public life but whose criminality and other utter refusal to join in the larger community is breathtaking.

And this has nothing to do with what whites have done or failed to do or our accursed culture and thinking. In the 1980s, my Vietnamese refugee auto mechanic in Falls Church, Virginia, had a daughter who was valedictorian of her class and who was going to medical school. He arrives in 1975 and in 15 years -- tops -- his kid is in med school. A young black guy in the D.C. school system studied night and day to get into an MIT summer program but was surrounded by black peers who criticized him for "thinking white." This outstanding guy knew exactly what he wanted to escape and what he had to do to escape it. And he did as a long WSJ article recounted, a link to which I can no longer locate. Nothing in the school or the "community", except his family, encouraged this incredible effort on his part.

What else needs to be said? Rejectionist blacks need to take a look in the mirror. If it hasn't been hit by a stray bullet . . . . It's not whitey looking back at you. But, no worries. The political class is ardently committed to fairy tales and lies on every issue that matters -- propagating them, that is to say -- so why should you be held to account for failing to get a grip?

Notes
[1] "Prospects for 2022—Terminus for the Race Denial Bus? or Institutionalized Jim Snow?" By John Derbyshire, The Unz Review, 1/2/22.