The familiar explanation for black failure – repeated endlessly in motion pictures, newspapers, magazines, and by political and educational leaders – is lingering white racism. As Taylor stresses:

"Americans are so accustomed to hearing – and repeating – this view that they scarcely bother to think what it means. It means, essentially, that white people, not blacks, are responsible for black behavior. It implies that blacks are helpless and cannot make progress unless whites transform themselves. 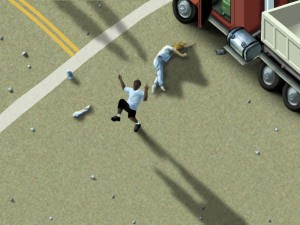 "Do blacks drop out of school? Teachers are insensitive to their needs. Do black women have children out of wedlock? Slavery broke up the black family. Are blacks more likely than whites to commit crimes? Oppression and poverty explain it. Are ghetto blacks unemployed? White businesses are prejudiced against them. Are blacks more likely to be drug addicts? They are frustrated by white society… There is scarcely any form of failure that cannot, in some way, be laid at the feet of racist white people."

"A Powerful Indictment of America’s Failed Racial Policy." Review of Paved with Good Intentions: The Failure of Race Relations in Contemporary America, by Jared Taylor by Charles Stanwood, The Journal of Historical Review, March-April 1993.
Posted by Col. B. Bunny at 7/25/2016